On 5 September, East Riding of Yorkshire Council became the 100th local authority to launch the MetalMatters programme to 114,000 households.

Held in Bridlington, the launch event was supported by one of the MetalMatters’ funding partners Valpak and formed part of a roadshow to educate consumers of the recyclability of metal. 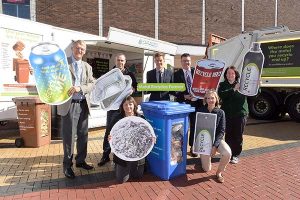 The people of East Riding already top the polls as England’s number one recyclers, with the council achieving the highest recycling rate out of all 350 authorities; this campaign will continue to raise their already impressive recycling rate.

The campaign follows on from a trial carried out in 2018 to a sample 40,000 households. The trial achieved an increase in steel capture of 41% and aluminium capture of 46% (compared to the same period in 2017) which encouraged the council to invest further and introduce the campaign to all residents across the East Riding of Yorkshire.

Nigel Tomlinson, Commercial Director, from Valpak commented “I was happy to attend East Riding’s launch of the MetalMatters campaign; firstly, to support an excellent initiative to help capture recyclable metals from the waste but secondly, as an East Riding resident, to show my personal support for the proactive approach that my local council takes to waste and recycling.”

MetalMatters is an industry-funded programme designed to increase the capture rate of metal packaging collected for recycling at the kerbside. Since its introduction in 2012, over a quarter of UK local authorities have signed up to the programme, which is clear endorsement that effective communications and partnerships between industry and local government is key to improving recycling rates, particularly at a time when recycling rates are stalling in some areas.

Earlier this year, MetalMatters was launched in Teignbridge in Devon to 62,721 households; in order to gauge whether the communications methodology and messaging is still relevant and achieving cut through with householders, consumer research was undertaken to identify how the programme was received and if it had an impact on their behaviour.

Rick Hindley, Executive Director at Alupro commented “Encouragingly when carrying out our consumer testing in Teignbridge, 18% of residents remembered the campaign without prompting and 32% recalled it when shown the leaflets – a recall rate which outperformed all expectations for a campaign with a modest budget. Of those, 90% thought the leaflet was either helpful or very helpful and 65% actually retained the leaflet to refer to in the future. We are pleased that our campaign messages are still echoing through households across the country, long after the campaign has ended.”

If you would like to find out more about launching a part-funded MetalMatters programme in your area, please look at www.metalmatters.org.uk or contact Julie Meeks at Julie.meeks@alupro.org.uk

Charity starts with a home: Valpak becomes a corporate partner for the Coventry House Project

Valpak is supporting 16 and 17-year-old care leavers with work advice and donations to help them get started...

Valpak was instrumental in helping gain approval for PRN funding for around 1,000 tonnes of PRNs. MYGroup, which offers total waste management recycling for a range of materials, is well-known for its innovative cosmetics take-back scheme with Boots and Body Shop.

Reconomy Group company Valpak, the UK’s largest provider of environmental compliance, has passed a major milestone, as more than one million packaging weight items have been logged through the company’s new Product Data Hub.

Under a new initiative which launched across South Tyne and Wear earlier this month, householders are supporting vulnerable people through recycling.

By clicking 'Submit' you are indicating your consent to the use of your personal data as explained in our Privacy Policy.